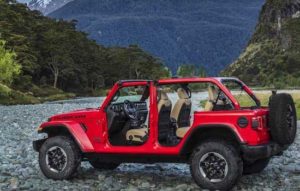 Occasionally Jeep’s reasoning for certain features will come up in conversati8on. One of the things asked the most is why does a Jeep windshield fold down?

The short answer is the windshield was designed to fold down in WWII to make shipping the Jeeps easier.

Jeep was introduced in WWII as a tough vehicle that was fast and could cover the majority of terrains.

The vehicles were so light that if they did get stuck on some terrain or in some mud the soldiers could actually lift them out of the problem area and continue on.

Those Jeeps were called Willys and were manufactured by Willys and Ford. Over 637,000 of these rugged machines were constructed during WWII.

Benefits of the Fold-Down Windshield

Those folding windshields that made transporting the vehicles easier turned out to make life for the soldiers easier in many ways.

The Willys were capable of having a machine gun installed on the hood of the vehicle. The fold-down windshield allowed the soldier inside the Jeep to have easy access to the machine gun in times of attack or emergency.

Increased Room in The Front Seat

Sometimes the soldiers had to use these vehicles to carry large items that extended beyond the front seat of the vehicle. The windshield could be folded down and that created more room for the things being transported.

Transporting the wounded to Army hospitals and aid stations was a big part of the Jeep duties, There were times when the Jeep driver was inundated with injured soldiers and needed to be able to transport two or more men on gurneys at one time.

One of the gurneys could be strapped to the rear seat section of the vehicle and the other one could be strapped to the hood of the vehicle. The fold-down windshield made it possible for a gurney to easily be laid across the hood and strapped in place so the driver could take more wounded to the hospital at one time. This feature saved many lives of men who would have died if they had to wait for the transport to return and get them.

The Fold-Down Windshield in Today’s Jeeps

The fold-down windshield is no longer needed to make crating the vehicle easier, but it is used in several ways that are similar to the original Jeeps.

Because the windshields of these vehicles can fold down the driver is capable of loading longer items, and odd-shaped packages into the vehicle. The longer items can stretch from the back of the vehicle across the passenger seat and extend over the hood easily.

Carrying things on the hood

There are times when you are off-roading and have the Jeep filled with people and cargo, yet you have one more item, like your surfboard, that needs to travel with you. All you have to do is fold the windshield down and strap the board on the hood. You are ready to head to the water and have a fabulous day.

You have to admit that Jeeps are fun to play in. Most Jeep owners love the sun and the surf. They love to travel with the freedom of having the doors off of the unit and the top removed.

Jeep owners also admit that folding down the windshield creates freedom they never knew existed. Their sturdy vehicles that can transport their children to and from school can be turned into a dune-buggy that is perfect for thrill rides up the side of a mountain, across a creek, or across the dunes of the seashore.

When you fold down the windshield your visibility is improved because there is nothing between you and the open road you are traveling.

When you are driving across treacherous terrain and every move you make is critical having the ability to fold down the windshield lets you have the ability to see every obstacle or possible danger.

When you are driving through heavy limbs there is a chance that you can get your windshield cracked or busted when a limb hits it. This is also true for other adventure driving like rock-crawling, Putting the windshield down prevents accidental breakage in these instances.

The Cons of The Folding Windshield

With everything, there are good points and bad points. There are some times when you do not want to have your windshield folded down while you are driving.

Why Do Jeep Front Windshields Fold Down?

Which Jeeps Have A Fold-Down Windshield?

The Gladiator and the Jeep Wrangler are among the Jeep models that still offer fold-down windshields.

How Do You Put The Windshield Down on A Jeep Wrangler?

You will need to unscrew a few Torx head bolts and your windshield will be ready to fold.