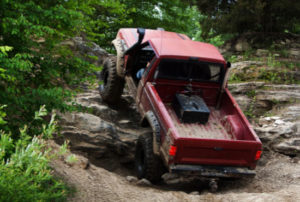 I have often been asked if Jeep Wranglers flip over easily.

If you are driving in a safe manner, you do not have any worries about your Jeep Wrangler flipping over.

With that said, in crash test collisions the Jeep Wrangler was more likely to flip if it had a side impact than some of the other SUVs in the test. This is due to the fact that the Wrangler has a higher than average, center of gravity and a slim base.

This is a very good question. The Jeep Wrangler has a natural center of gravity that is higher than average. That is the main reason why these vehicles are more prone to flipping.

The lift kits raise a vehicle even taller and this increases the center of gravity even more. The Wrangler is already equipped with 10.8 inches of ground clearance so when you start adding lift kits, bigger tires, and all those bells and whistles you end up with a vehicle that is more capable of flipping than most other vehicles.

You must also consider that when you add a lift kit it is harder to handle the vehicle. The Jeep is not going to be as easy to correct if you need to swerve to avoid hitting something or you need to brake to stop from having a collision. The decrease in control will make it easier to flip these vehicles.

Soft tops on Jeeps are also very popular and they do not provide the same protection that the hardtop can provide. It is recommended that if you are driving with small children in the vehicle you keep at least a soft-top or bikini top in place and you always use appropriate safety seats and seat belts while the vehicle is in motion.

The biggest cause of a rollover accident is the driver of the vehicle losing control over the vehicle. Many times, the loss of control is caused by a driver who is traveling at speeds that are unsafe for the terrain and weather conditions they are traveling in.

Other reasons for loss of control include:

A Quick Video Guide For You

On The Positive Side

The Jeep Wrangler may have a greater tendency to roll over than most other SUVs but they are also designed so that if they do roll over there is less chance of serious injury.

The frame of a Jeep Wrangler is designed to be durable and protective. The frames are specifically designed to roll and not allow the very top section of the cab to cave in. If these vehicles flip or rollover, they are capable of keeping the passenger inside safer than most other SUVs can.

The Jeep Wrangler is designed with a bulky body so they give added protection to the occupants. Jeeps are taken off-road into dangerous driving areas and their bodies are built to withstand the hits and impacts that may come along with that rougher terrain.

The Jeep Wrangler is designed to be driven in inclement weather and over the worst terrain. That makes them safer in many situations than their competitors are.

Facts you should Know:

Why Do Jeeps Flip Over Easily?

Is The 2-Door Jeep Safer Than The 4-Door?

The short answer is that both of these vehicles are very safe. The four-door versions are heavier and are built on a longer wheelbase so they are less likely to flip and turn over than the two-door versions.

Are Jeep Wranglers Safe To Drive?

Jeep Wranglers are safe vehicles and they have a good frontal impact rating from IIHS. On the downside, they perform poorly on rollover tests by NHTSA and they do not have airbags in the doors to protect against side impacts.

Rollover accidents do occur. The Jeep Wrangler has a higher center of gravity that allows it to travel over rougher terrain and that also increases the risk of a rollover accident. If you drive safely, maintain an appropriate speed, and stay focused on driving you reduce your chances of having a rollover accident by as much as 60%.