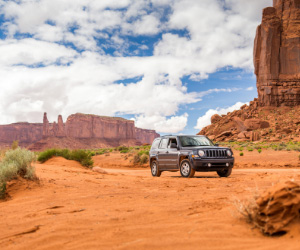 Why is Jeep Patriot so Cheap to Buy? (Let’s Find out The Reason)

The Patriot is not a model that is made any longer, but you still see a lot of them for sale, and driving up and down the road. There was nothing wrong with the Jeep to cause the manufacturer to want to discontinue it, the problem was the Patriot did not have a lot of advanced technology designed into it.

From 2007 to 2017 the Patriot was possibly the cheapest Jeep available. It was purchased by a good number of people, it just did not live up to the luxury expectations, or technology packed ideas people thought vehicles should have.

The lack of advanced technology like parking assist, touch-screens, remote access, rearview cameras, and such are a big reason why the Patriot was a more affordable vehicle. It was not a car with all the bells and whistles, it was simple, easy to operate, and that kept it priced lower than other models.

The Jeep Patriot was a smaller SUV. It did not have the massive amount of cargo room, and you could not fit eight people and a dog in it.

The Patriot was smaller, but it was adequate for the transportation of a family of four or five people. It gave people the ability to have an SUV, which everyone wanted more than a Sedan, yet it was smaller, easier to park in crowded city spaces, and it became really popular.

The Patriot Had The Basics

You could say the reason the Patriot was so cheap, and still sells for less, is they are basic vehicles. They have simple interiors. You will not find expensive luxury leather seats or heated seats in these vehicles.

They came with a basic sound system, a radio that could pick up Am or FM stations. There were no CD players, tape players, or expensive speakers.

The windows on the Patriot had to be manually rolled up and down by turning a handle on the inside of the car on the door panel. There were no push button controls that made the windows raise or lower.

There were no power locks on the door, so you could not simply hit one button and lock every door in the vehicle. You also could not lock the windows, so if your child wanted to roll down the window they could do so.

The Patriot Engine was Smaller

The Patriot had an inline four-cylinder engine under the hood. It was a 2.4 liter that was not offering a lot of horsepowers. This was okay because the Patriot was designed to be a vehicle that you could depend on to take you to work, shopping in town, drive the kids to the dentist or school, and make occasional road trips in.

It was not designed to drive over off-road terrain, climb mountains, or take you on grand adventures. It was a dependable, sensible vehicle with enough power to take you from point A to point B at a proper speed.

You can say the Patriot is so cheap because it is a no-frills vehicle. It came with a radio, heater and air conditioner, headlights and tail lights, and manual everything.

Reading all of the reasons why the Patriot was so cheap can make you think badly of the little SUV. There were a lot of positive things about the Patriot that deserve to be mentioned.

The Jeep Patriot is cheap, or was cheap, because it was a simple vehicle and not a luxury item. Jeep offered upgrades that would make the vehicle more comfortable, more attractive and more powerful, but rather than pay the upgrade price the majority of buyers just opted to buy a different modle.